I can say without hesitation, that during my honeymoon, I ate my favorite Swiss meal in Lucerne, Switzerland. (I know what you're thinking... Although most of my honeymoon pictures were deleted, I still have a few up my sleeve! Sorry for the old content, but remember, NBA playoffs aren't over yet!) 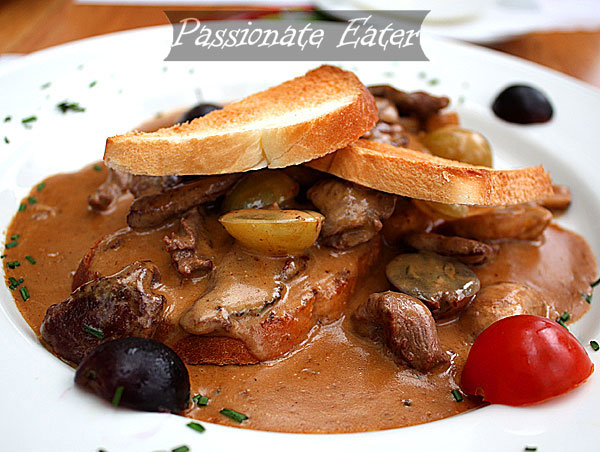 Allow me to give some background. My husband and I had worked up ravenous appetites after vigorously touring the Lucerne area, and we needed lunch immediately. We had spent hours admiring the wooden Chapel bridge (Kapellbrücke), which was decorated with compact rows of flower bushes and vivid paintings which hung above the bridge walkway. We also toured the serene surroundings of Lucerne's lion monument (dedicated to those who courageously fought in WWII) and stared for hours at the glimmering river water, which was so transparent, not only could you see to the bottom, but you hardly noticed it was there.

After our intensive walking tour of Lucerne, we were starving. And I mean, starving. Therefore, my beau and I stopped by Hug, a restaurant-bakery heartily recommended by our travel guide. The eatery was bustling, and featured a glass case full of buttery pasteries.
Since we were starving, upon being seated, we immediately shoved the complimentary bread into our faces like uncouth neanderthals. The sweetness from the crushed bread grains filled our mouths, and we allowed the rough edges of the bread crust to dissolve on our eager tongues. 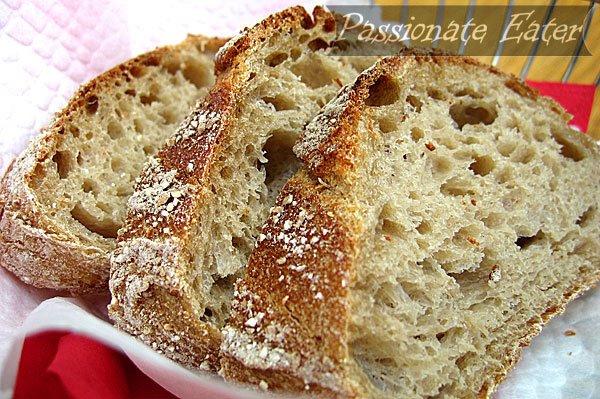 We ordered our meal after a quick conversation mainly consisting of, "Sprechen Sie Englisch?"
Thankfully, within minutes, our steaming hot side order of fries arrived. They appeared and tasted similar to fries that we had had in Amsterdam, with a surprisingly yellowed surface (much yellower than the U.S. counterparts). Despite the pronounced "golden" color, the fries were just as delicious as excellent American fries. With a crisp shell, and moist interior, the fries were exactly how good fries should be. We also were given a salad of iceberg lettuce with a creamy dressing to further begin our meal. The simple salad and "Swiss" fries quelled our appetites for the arrival of the main dishes, which were the stars of our meal. 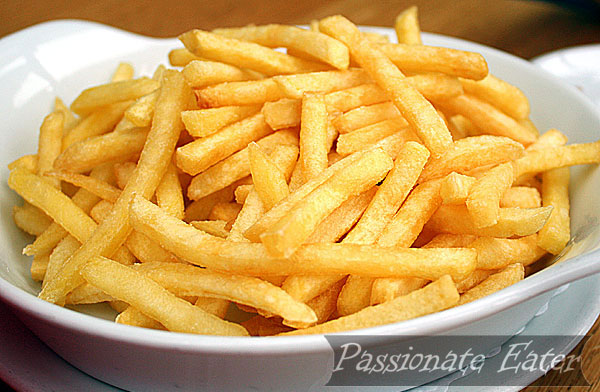 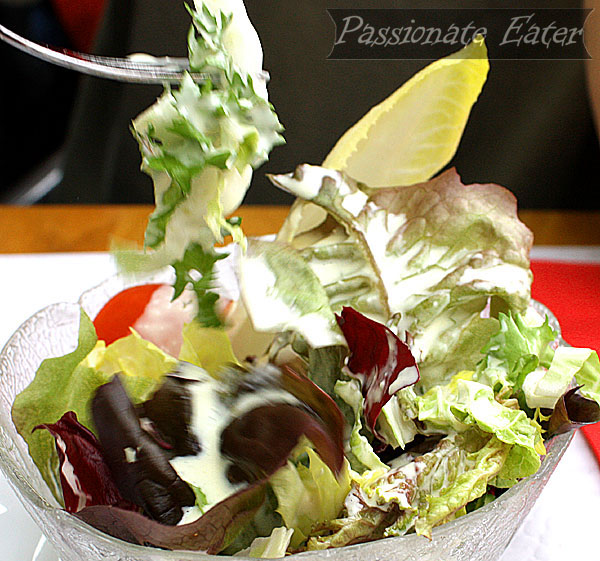 I had ordered the Bernese-style röesti (or rösti), a pan-fried grated potato dish similar to America's hash browns. However, in a Swiss röesti, there are many other flavorful additions, such as finely chopped onions and garlic, and gruyère cheese. For the röesti that I scarfed that afternoon, I particularly adored the chive ringlets garnishing the crisp potato edges and gruyère cheese that oozed out of the crevices of the pan-fried potato pancake. (During my visit to Switzerland, I fell head-over-heels in love with gruyère, which possesses the sharp tang of Swiss, with the encompassing savory and umami flavors of parmesan.) Topping the röesti were supple strips of soft bacon cooked to a delicate perfection, not into a dry, sandy, lifeless, and overcooked meat cracker. 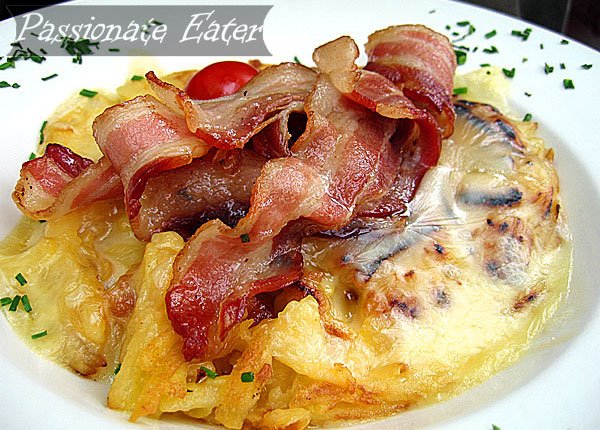 However, by far, the best entrée that afternoon was the "toast Diana" which consisted of sliced venison in a savory game cream sauce with mushrooms and white grapes, all over crisp toast points. The rich fullness and intensity of red wine permeated the complex game sauce, which was substantiated by the large and meaty mushroom slices. The hearty gravy paired well with the sweetness from the halved grapes and grape tomatoes. I literally licked my plate after this meal. 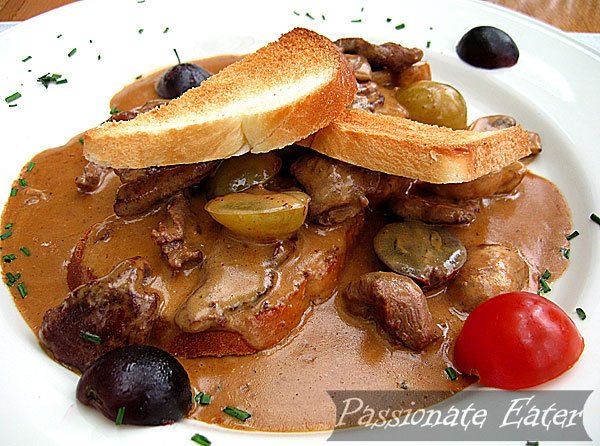 After we concluded our meal at Hug, we walked along the peaceful waterfront, watched the sunset, hit up the local casino in Lucerne for a game of poker, and headed back to Zurich to spend the evening. But again, just to reiterate, my favorite part of the day was receiving a delicious Hug.
cooked up by Passionate Eater at Sunday, May 17, 2009 35 comments:

Whew, I'm still completely occupied by the NBA playoffs. But the good news is that I'm back for a quick post! But first, I need to get something critical off my chest...

Although I'll always be a "LakerGal4Life" (that's my screen name when Phoenix or New Orleans aren't playing), I have to say that the Houston Rockets were robbed last night by miserable officiating. Those NBA refs are about as anti-Ron Artest as you can get! Here's my post-game commentary: There's no way that Artest committed a flagrant foul, especially when Vujacic got away with a lot worse earlier in the evening. Thankfully, the Rockets aren't one of "my" teams, otherwise, I would probably be bed-ridden right now.

...But seriously, enough of the irrelevant ranting about corrupt NBA refs, I need to post already! This is called a food blog after all.

For today's post, I'd love to share one of my favorite salad recipes for Vietnamese green papaya salad. I actually don't consider this a "salad" per se, but a cooling, delicate slaw. 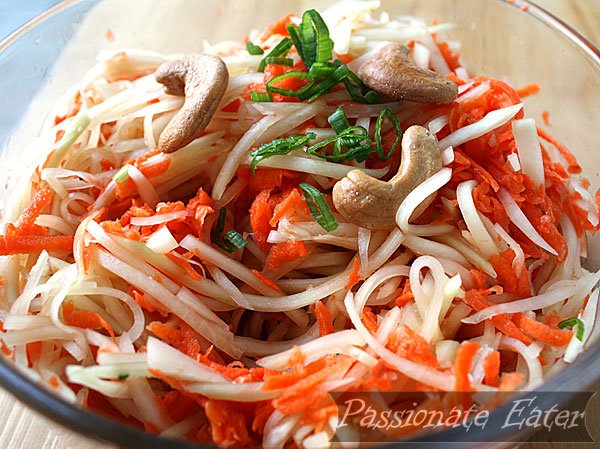 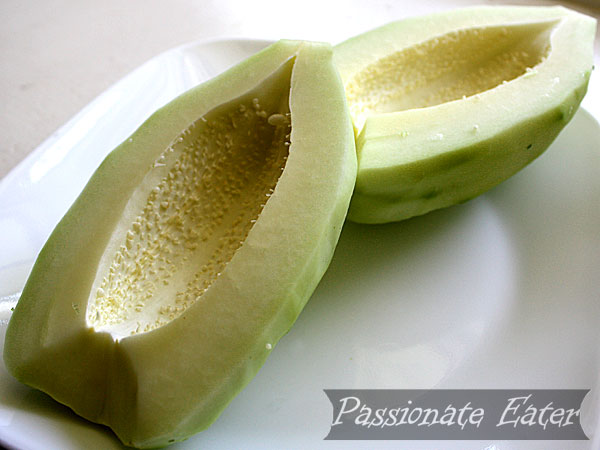 First, peel the hard green papaya with a vegetable peeler (if you haven't done so already). Then, cut the papaya in half, lengthwise, and use a spoon to scrape away all of the seeds from the inside. Now, you can either use a fancy mandolin or a knife to finely julienne the papaya into thin matchstick-sized strips. You want the strips to be as narrow as possible, so that they can absorb the bright salad dressing. However, I would advise against using a shredder here, because shredded papaya makes the salad look a tad sloppy and unrefined. 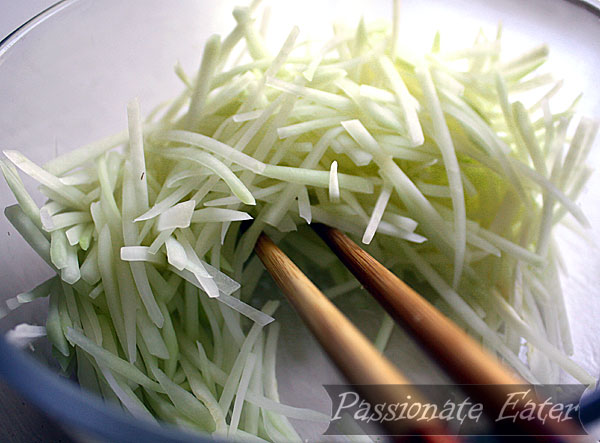 However, you can shred the carrots with a regular grater because the green papaya is the star of this slaw, while the carrots are almost an afterthought. 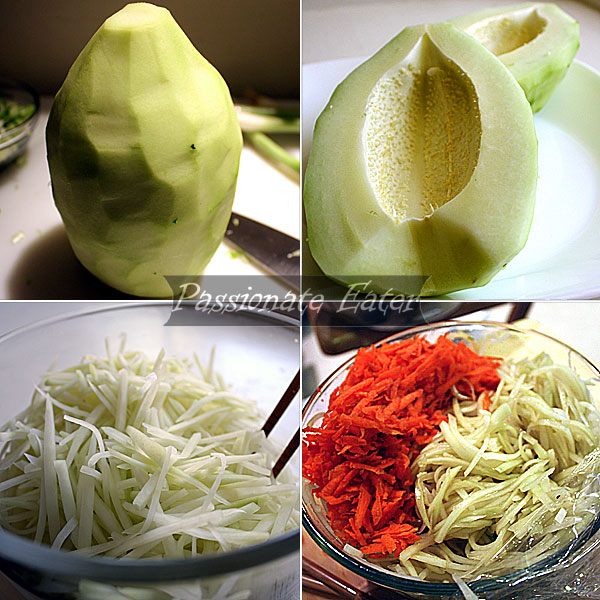 Meanwhile, combine the lime juice, lime zest, fish sauce, garlic, scallions, Thai bird chilies, and sugar with a whisk, making sure that the sugar is completely dissolved. Drizzle the finished dressing over the shredded carrots and julienned papaya strips, and stir well to combine. You can serve this immediately, or marinate it in the fridge for an hour to allow the flavors to meld. This slaw keeps in the fridge for up to a week. When you serve it, just strain away the excess dressing. 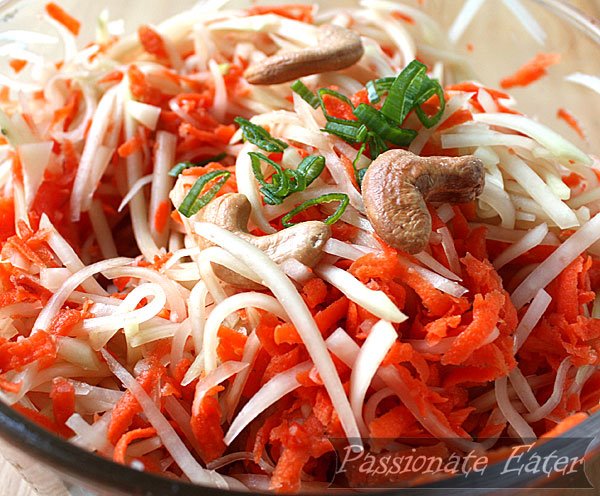 Finally, serve the slaw with cilantro or basil, and roasted cashews or peanuts as garnish, and enjoy!