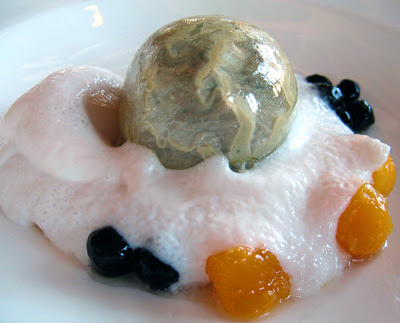 Now that I am bidding adieu to the wonderful City of San Francisco, I am making it my goal to patronize all of my favorite San Francisco restaurants for "one last time." One of those restaurants on my list is Citizen Cake in Hayes Valley.

Citizen Cake is the apotheosis of a "pastry chef's restaurant." In fact, that is the restaurant's slogan. The executive pastry chef of Citizen Cake, Elizabeth Faulker is one of the most renowned pastry chefs in the world. If you visit her restaurant, take a quick glance at the wall to see her "Iron Chef America" medallion hanging proudly in a frame.

Given the numerous accolades and vehement praise for Citizen Cake, I made sure to visit it on my "farewell to San Francisco" tour. I decided to lunch at Citizen Cake with a few friends. I ordered the crab cakes. The crab cakes came with a dipping sauce of tarragon cream and salad of fennel, arugula, and grapefruit. The creamy mayonnaise in the cakes acted as a thick adhesive, binding together the crab meat fibers and the discernable nubs of chopped relish. Quite good. 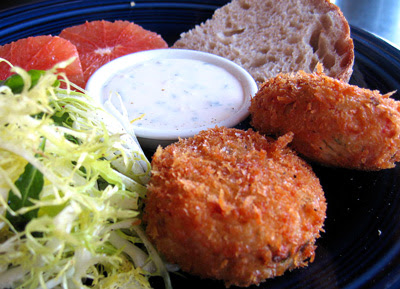 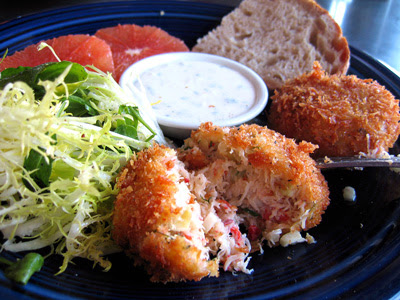 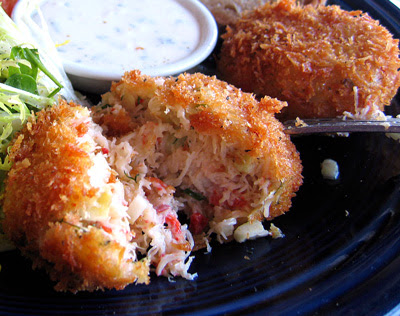 My friend ordered the Chinese chicken salad, which was dressed in a peanut emulsion and ginger-citrus vinaigrette and topped with wonton crisps. I did not taste it, but it looked gorgeous. 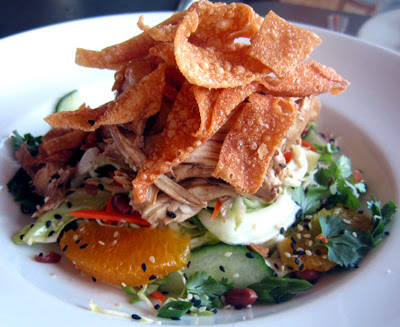 Despite these distracting lunch items, the main purpose behind our visit to Citizen Cake was to feast upon the visually-arresting desserts.

For dessert, I ordered the "black island," which was a black sesame crème brûlée enclosed in a bubble of sugar, and served over a frothy bed of mango-lychee tapioca and coconut-almond foam. When the crème brûlée arrived, our table let out a collective gasp of awe. It was beautiful. I used my spoon to gently touch the surface of the sugar bubble, expecting the bubble to be a stretchy latex-like balloon. Instead, my limp spoon was confronted with a glassy orb as impenetrable as the bulletproof windows in front of the teller at my local bank. When I eventually broke into the solid sugar patina, I was able to taste the light and cloud-like meringue encapsulated within. It was a complex flavor-extravaganza. There was also a liquid strip of sesame paste running across the plate, which looked as if someone punctured open a black sesame soup mochi (tong yuan) and vigorously squeezed out its contents. I found this tasty addition to go well with the theme of the dish. My only beef about my dessert was that the sugar shell was like rock candy, which uncomfortably amassed into the crevices of my sensitive molars. Otherwise, the dessert was great. 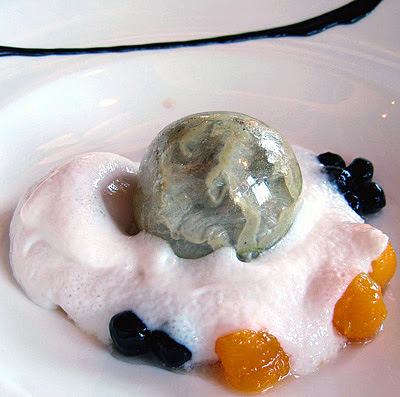 My friend ordered the "one-two sting," which came with a spiced pineapple shot, broken chocolate cake hazelnut mousseline, tonka bean ice cream. This dessert was not artistically as impressive as the "black island," but it was delicious. The chocolate cake tasted like a partially-cooked brownie with uncooked spots of gooey batter. Additionally, the flavors and textures of the ice cream were familiar and comfortable. However, I would have done a little bit more with the presentation because the cake looked like a smashed dog turd. 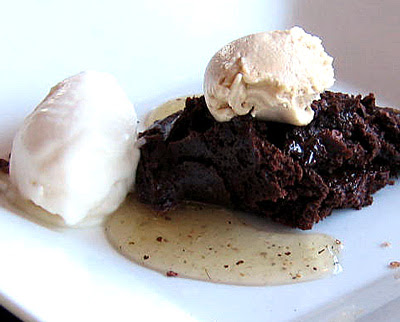 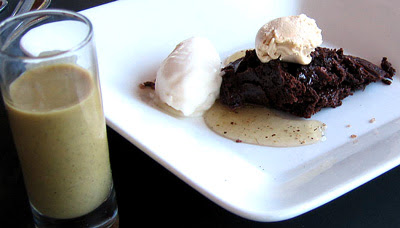 My other friend ordered with the "banana split now and then," which included two banana beignets, a tuft of chocolate noodles, a rotund scoop of raspberry hibiscus sorbet, sheets of peanut paper, and a secret emulsion. The banana beignets were delightful. The golden, crisp-fried exterior of the beignets were dusted delicately with powdered sugar and the airy and cakey interior was sublime. The dried strawberry chips and edible flowers were amusing compliments, and I enjoyed the peanut paper, which was a sophisticated version of peanut brittle. 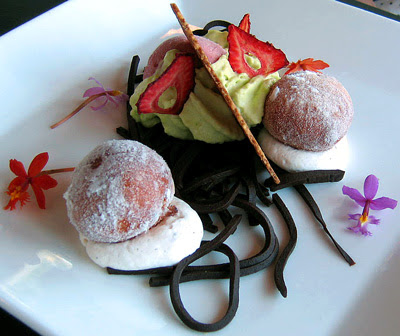 However, this dessert was beleaguered with the collision of its conflicting flavors. First, the thick chocolate pasta did not taste at all like what I expected. The noodles were not sweet, but were bland and slightly bitter, like the outdated bar of unsweetened baking chocolate in the pantry. Second, although I enjoyed the individual elements of the dessert, when paired together, my taste buds were overwhelmed.

Each of us lightly dipped our teaspoons into the foam for a diminutive taste. Hm. . . The flavor was familiar, yet odd and mildly repulsive. Based on the color, we threw out some guesses, including "green tea." Eventually, our server laughingly declared that the flavor of the emulsion was "asparagus." I screamed, "What?!?!?! You lying b-hole!" . . . Well, not really, but I was affronted that someone would sneak asparagus into our dessert.

Allow me to employ an analogy to explain my indignation. If you have ever seen the late-80s / early-90s movie, "Love Potion No. 9," you will remember the pudgy and bejeweled prostitute at the end of the movie. She was dressed in a classic 80s outfit: she wore neon eye-shadow, fishnet stockings, and dime-store bangles. (If you have not seen the movie, you can skip this paragraph.) Towards the end of the movie, the prostitute takes one lick of the highly-concentrated form of the syrupy love elixir, and immediately attracts the undivided attention of the male species and the angry wrath of the surrounding females. Old ladies dressed in their "Sunday's best" begin hurling sexist epithets at her and glare at her with eyes that look so evil, you would think they were possessed by demons.

The sentiments of the demon-possessed ladies in the movie communicate my anger. You cannot sneak asparagus into a dessert! It is a matter of principle!

Despite the ass-paragus surprise, I enjoyed my visit Citizen Cake, as I have enjoyed it before. As my friends and I polished off the rest of our desserts, we came to the realization that we did not just consume a meal at Citizen Cake, but we had also been entertained by the elaborate and painstakingly-created desserts. Going to Citizen Cake is better than going to the movies.

I highly encourage you to check out Citizen Cake if you are ever in San Francisco. And do not forget to check out the desserts in the glass case adjacent to the cash register counter. When me and my ogle-eyed friends went, we yearningly stared at the following panoply of items: 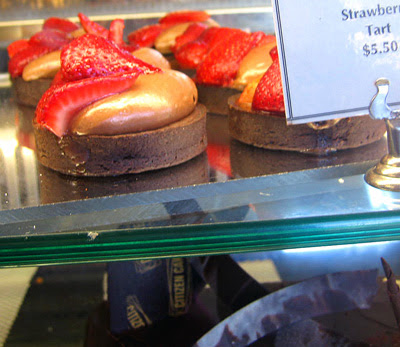 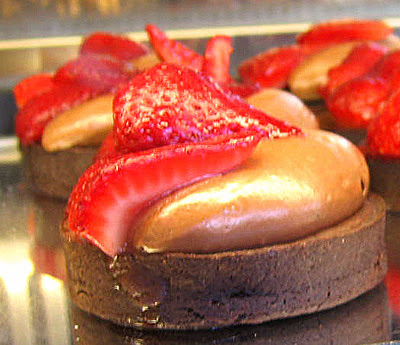 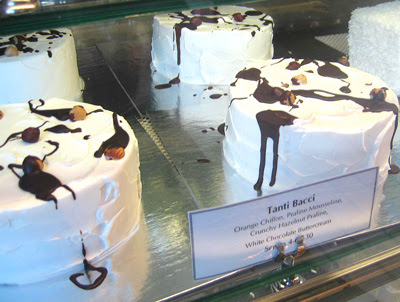 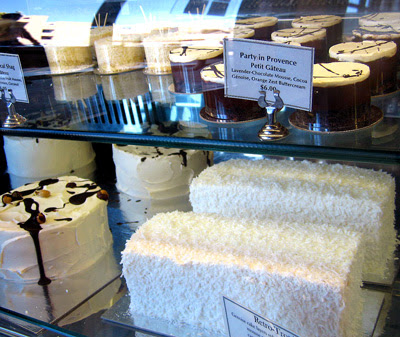 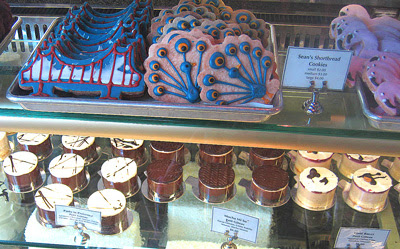 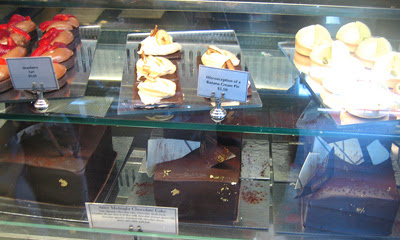 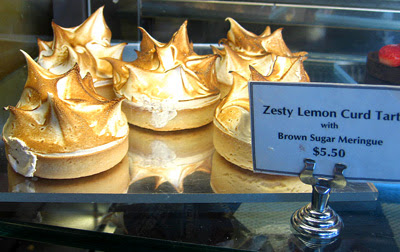 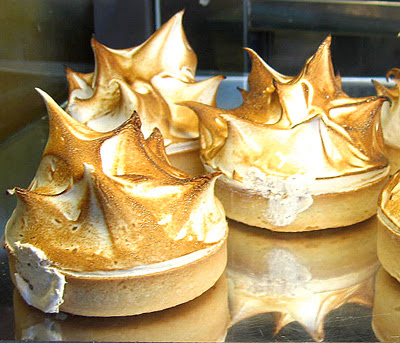 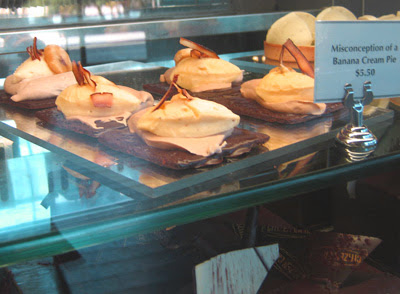 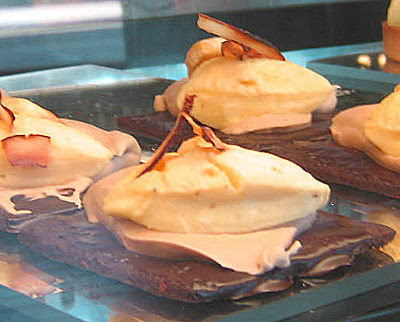 Now, if that is not enough to get you hungry, I do not know what is!
cooked up by Passionate Eater at Wednesday, July 18, 2007