I grew up in a land-locked desert state with no access to fresh seafood. That is why when I moved to San Francisco, I was amazed at the distinction between "previously frozen" seafood and "fresh" seafood--the only seafood I had ever had was purchased in a frosty, icy block, which thawed out under running tap water.

After living in California and visiting the East Coast, I have learned more about seafood. For instance, did you know that on the West Coast, they sell crab by the pound, but on the East Coast, they sell it by the bushel? Also, the shrimp on the East Coast is pink before it is even cooked, whereas the uncooked tiger prawns and shrimp on the West Coast is striped-black with grayish flesh! I am also beginning to understand to way different regions like to eat seafood. Maine lobster, Maryland crab, Louisiana shrimp . . . Either saturated in melted butter and lemon, or dredged in caked-on Old Bay seasoning, I am beginning to love it all.

This past weekend I participated in another educational event--I took a trip up to Point Reyes to sample fresh oysters from the acres of ocean farms in the area. Armed with nothing more than a pack of disposable napkins, plastic utensils, and a bottle of organic cocktail sauce, I set out on my mission. 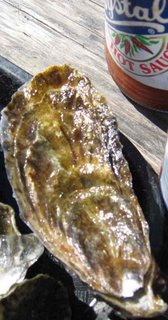 For me, learning how to shuck oysters was an ordeal in and of itself. My first attempt resulted in shards of splintered oyster shell flying across the picnic tables and my knife-welding arm jerking and flailing like a suicidal maniac. 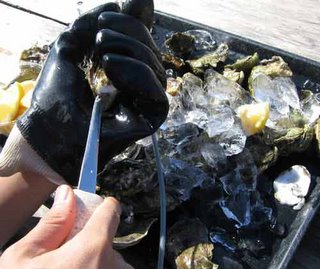 However, practice makes perfect. I learned how to shuck oysters at my companion’s expense--meaning that I shucked them, while he had to eat the consequences. My companion was so kind, that instead of wincing each time the chipped oyster shells lodged into his teeth and throat, he would discreetly remove it from his mouth with a napkin. 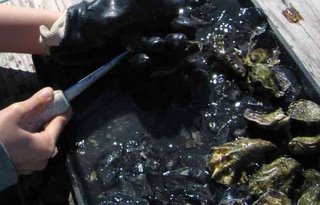 The raw oysters were magnificent. I was originally skeptical of the claims that oysters living in the same waters can have varying degrees of sweet and salty flavor. However, after tasting them, I actually began to detect the differences between Kumamoto, Sweetwater, and French Hog oysters.

Although I am still not completely at ease with slurping up the oyster meat and briny oyster liqueur, the oysters tasted great with a helping of hot sauce and cocktail sauce. 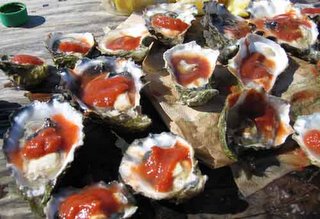 It was definitely one of my favorite trips, with a great lesson from the seafood department. 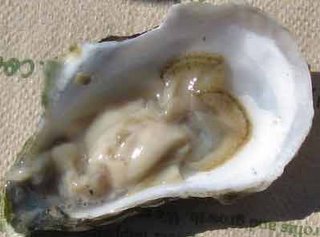 cooked up by Passionate Eater at Saturday, October 29, 2005