I have been trying not to become a restaurant review blog--since my Dad owns a restaurant, and my undivided loyalty belongs to him--but I love talking about food, and I love sharing my experiences. Thus, to be fair, each time I blog about a restaurant, I try to discuss the good and the bad.

One of the restaurants that I want to share about, is Joe's Shanghai in New York. My friends on the East Coast claim that this place makes "the best shao loeng baos" outside of the city of Shanghai itself. I was deprived as a kid when it comes to shao loeng baos, but I'd like to think that I know a good shao loeng bao: one bite and hot juices come bursting forth all over your chin and freshly laundered white shirt. (For some reason, I am channeling thoughts of Gushers Fruit Snacks or that Chiclets-like gum from the Eighties with the liquid center. Chewels. Remember those?) 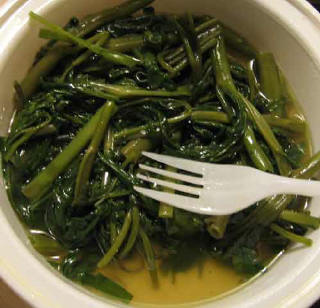 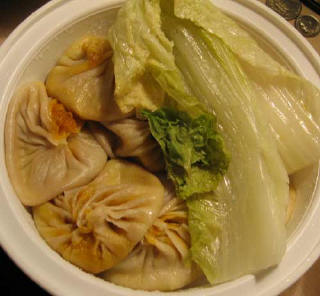 As I saw my friend (native of the East Coast) greedily snatching up the buns like they were $100 dollar bills flying in the street, I was a little more cautious of the hot, mouth-burning explosions to come. Plus, those buns had lots of built-up expectations riding on their spiral-pleated shoulders. I grabbed a dumpling with my disposable chopsticks, and the steaming little pouch hovered precariously over my open mouth before making its final landing. Three, two, one. . .

Gasp! There was brown gravy inside shao loeng bao! Thick and heavy brown gravy! It wasn't the clear brothy juice that I was used to!

After the stinging shock of disappointment wore off and my vision was restored to normal, I reached for another soup bun in the rapidly emptying container, just to make sure that last one wasn't an anomaly. Another bite confirmed that the dumpling innards indeed contained gravy.

As our meal came to an end, it was funny to see how I experienced dissatisfaction while my friend experienced absolute euphoria.

Eating the legendary dumplings at Joe's Shanghai definitely taught me a valuable lesson. Even if I grew up on the Panda Express version of shao loeng baos, my friend's and my own diametrically opposing reactions illustrated that different life experiences with food really can yield different results.

cooked up by Passionate Eater at Saturday, December 03, 2005