Why Did'ja Do It to Me Sam Woo? My Restaurant Manifesto

For the 7+ hour drive down to Southern California from Northern California, my family has designated certain pitstops as places we "always" stop, even if we don't need to fill up on gas or go to the restroom. One pitstop is the fast food haven in Lost Hills, and the other one is Sam Woo in San Gabriel. The Sam Woo that acts as our rest-stop, is not from the Sam Woo Seafood Restaurant lineage (referred to "Sam Woo-bourgeoisie," because it is generally priced around $10/entreé), but it is the Sam Woo BBQ Restaurant (referred to "Sam Woo-proletariat," because it is priced around $5/entreé), or as I like to call it, "the Sam Woo for the working, blue-collar people."

When I recently drove down to visit my parents, I was accompanied by a friend from the East Coast who had eaten in the Monterey Park/San Gabriel area before. He told me before, that Southern California is "nirvana" or "Garden of Eden" for a Chinese-food lover. As we slowly crept our way through the hellish bowels of Los Angeles traffic, he wanted me to suggest a cheap and delicious place we could grab a quick Chinese meal. I was pretty confident that Sam Woo would deliver on his expectations.

When we finally arrived, we were physically exhausted, irritable, and our buttocks were sore and tense from sitting in bumper-to-bumper holiday traffic. Both of us were expecting a meal to "satisfy the masses."

When we were seated, I was surprised by the lack of patrons in the restaurant. I remember there was always a line with large families waiting for seats, and how the old grandparent-types would sit in the waiting area reading their daily newspapers. That day, the restaurant wasn't even half full. But when I looked around, I was happy to see the same waiter there (he must have been working there for about ten years), and also I was overjoyed to see that prices hadn't changed either. $4-5 bucks for choice entreés? They need to move a Sam Woo up to the Bay Area!

Since my friend was the driver, I let him call the shots (I let him order, with only minimal interference).

Our first dish of coeng ching tsai arrived in a monstrous looking mound. Because I had been pandering to my friend's belief that Monterey Park was the "promised land," I tried to describe the faults in the dish as an unusual deviation. But as soon as I tasted it, I realized there were no redeeming qualities to the pile of flaccid, slimy, and fibrous mash. 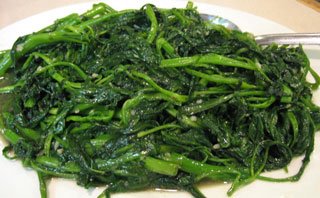 Okay. Maybe our pent-up road rage was causing us to be easily disgruntled. "Give it another chance," I pleaded to both him and myself.

Ten minutes after the coeng ching tsai had arrived, the next dish hit the table. I had more of a role in ordering the hi shen tsow mein (seafood chow mein), thus, it felt like a steel-semi truck of disappointment hit me in my gut when I saw the way the dish looked. The noodles were mangled and mottled up like a hairball made of greasy orange yarn. See, when my Dad ordered the "same" dish from Sam Woo, I remember decoratively-quartered leaves of baby bok choy gracing a symettrical and crispy pan-fried cake of golden egg noodles. I remember huge pieces of shrimp, white fish, scallops, and squid. I also remember that the sauce perfectly coated the noodles, so as not to ruin the crispiness of fried noodles, but to provide a harmonious balance of flavor and texture. 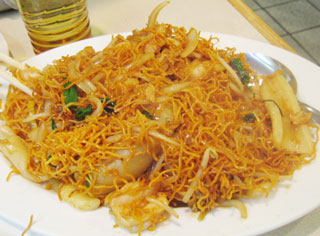 Our hi shen tsow mein looked like the waiter gave us a dish that an unsatisfied guest had sent back, and the cooks just re-fried the whole thing together again for the next people who were unfortunate enough to order the same thing--us. There were no crispy noodles. None. There was no bright bok choy. None. Just oily, soggy noodles and sporadic bites of seafood. 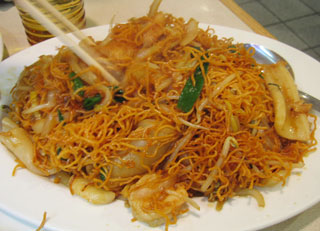 After waiting for fifteen minutes, we thought that the waiter forgot to write down our final order. We were about to leave and pay our bill, when he came rushing out with our plate of jow yen yo yee (deep-fried and salted squid). This is actually something that I didn't have a lot of experience with eating or ordering, so I didn't have very high expectations. However, my friend did. One bite, and he spit back into his napkin. "This dish is not worth eating, let's pay the bill and go now," he resignedly grunted.

"Wait a minute, I'm not going to pay for a dish and only have you eat one bite!" I angrily retorted, as I shoved an entire fried fritter into my mouth. 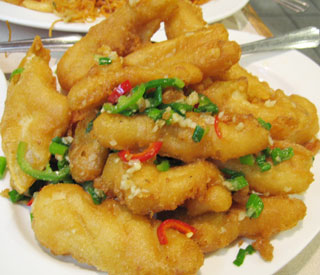 Although the jow yen yo yee was colorfully presented and looked delicious, the taste was something else. Stale oil permeated the batter-coating and made it taste like a musty closet--complete with the strange moth ball aroma. Plus, they took the "yen" (salt) part of the recipe to a new extreme. It was so salty, I could feel my mouth reflexively and unconsciously puckering, as if trying to expel what was inside of it.

After we paid the bill and began to exit the shopping plaza where Sam Woo was located, my friend asked me whether I would go back again.

Would I go back again? Oh hayelll yea! It's Sam Woo! So the food was bad one day, no big deal. No "invisible hand" will ever drive me away from Sam Woo. It's given me too many great memories, full bellies, and cheap meals for me to ever change my ideology.
cooked up by Passionate Eater at Thursday, December 29, 2005