These past two weeks the Bay Area has had Spare the Air for three business days in a row!!

For those of you unfamiliar with the concept of "Spare the Air," it is a Bay Area program funded by the federal government where all public transportation is provided for free, in an effort to curb the release of noxious vehicle emissions at a time when the ground-level ozone (smog) in the atmosphere reaches unsafe and unhealthy levels.

Last Thursday, Friday, and this Monday were all "Spare the Air" days, so my best friend and I rushed to take advantage of the free public transportation with a culinary tour through North Beach (San Francisco's equivalent of "Little Italy") and Chinatown.

For North Beach, we planned on eating ridged waffle cones filled with thick, chilled, creamy, and viscous strawberry gelato and the small amaretto liqueur candies cloaked with a powdery desiccated coconut--you know, the kinds that are like a gourmet-version of a soft Tootsie Roll? Also, there are Greek places hidden in San Francisco's Little Italy, where you can get honkin' Greek pitas stuffed with grilled lamb and dressed with a fresh and cooling tzatziki (a yogurt, cucumber, and mint sauce).

At San Francisco's famed Chinatown, we planned on scarfing down crispy Portuguese-style egg tarts at the best place to have egg custards outside of Portugal (and Taiwan), a hole in the wall in San Francisco's Chinatown. There, we relished the buttered, flaky crust and the warm and soft custard centers--smooth centers that are silkier than freshly whipped cream, but with enough resistance to provide a snappy gelatinous bite. "San Francisco's Chinatown is a tourist trap," you might say. However, I disagree. Take a jaunt a mere block to the parallel streets, and you'll find where the locals hang and eat.

The main object of this post, was our dinner stop for our tour: the notoriously delicious restaurant, The Stinking Rose.

We started with the pillowy-soft garlic focaccia rolls, which we broke open and smothered with "garlic rose relish," a simple pesto made with olive oil, crushed cloves of garlic, minced parsley, and tart vinegar (vinegar which brings out the hefty, meaty, and pungent flavors of the garlic). Every three seconds, I would open the transparent plastic lid to the relish jar, repeatedly dunk the serving spoon, and retrieve heaping ladles-full of the garlic + olive oil concoction so that I could smear it over the bread. 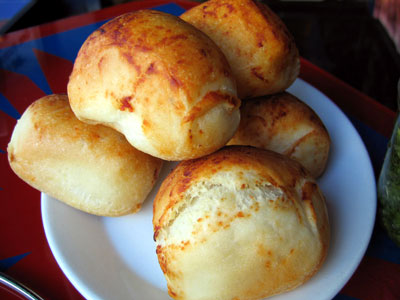 We also dined on a monstrous mountain of creamy mashed potatoes, potatoes that were colored with a garlicky pesto that had been mixed and folded into the thickened mash. 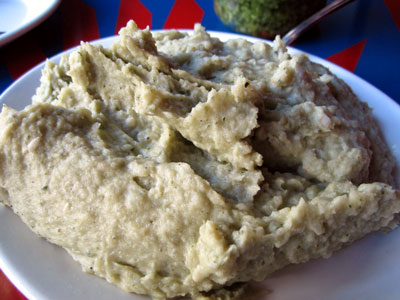 The entreé of the evening was the sizzling iron skillet of shell-on shrimp with blackened edges, iridescent shelled mussels, and golden roasted garlic cloves. The skillet was served with an elegant drizzling of a soy sauce blend and a dipping tin teeming with melted butter. The open mussel shells beckoned my greedy fingers, and the shells acted as little bowl repositories that held pools of melted butter and briny seafood liqueur. After cracking open and slurping up all of the shellfish in the seafood skillet, my mouth emitted the most noxious emissions known to man: garlic seafood breath. 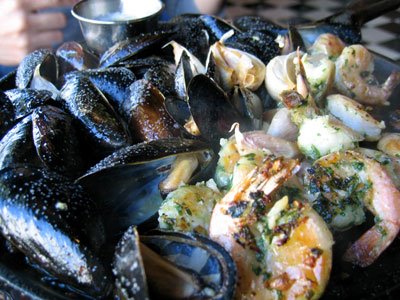 As I saw the green fumes emanating from my open mouth, I realized that in my gourmet quest, I had inadvertently defeated the purpose of "Spare the Air" day.