I am the type of person who would rather live in the sun-blinding, searing heat of Death Valley than live in a region that snows or has temperatures under 30 degrees fahrenheit. To combat this week's frigid weather in the arctic-feeling Bay Area, I opted to make a warming, hearty, and nutritious meal of oxtail stew.

Making oxtail stew is relatively easy. You don't need to vigilantly babysit the stew to make sure it doesn't burn or stick to the bottom of the pot. All you do is throw the ingredients together in a large dutch oven, turn the gas flame to medium-high, and come back in three hours.

However, I did not have that much to do today, so with the aid of my trusty digital camera, I snapped pictures of the various stages in the cooking of oxtail stew. What follows will be quasi-narrative, quasi-recipe, and 100% hunger-inducing! (Hopefully.)
Stage #1 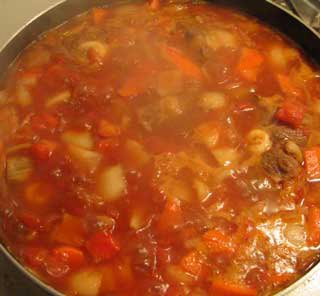 First, brown the meaty portions of oxtail alongside cubes of yellow onion and sizeable chunks of carrots. Once the edges of the onions begin to caramelize and turn brown (the onions should still be a crunchy and white in other places) fill the pot with red wine, a thick can of chunky stewed tomatoes, and boiling water.
Stage #2 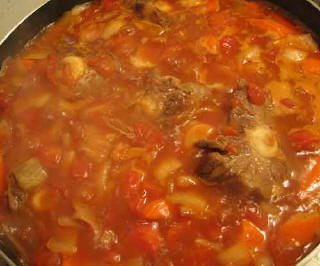 After 30 minutes, you may find that nothing has changed much--except you will notice that the soup-line is slowly receding. 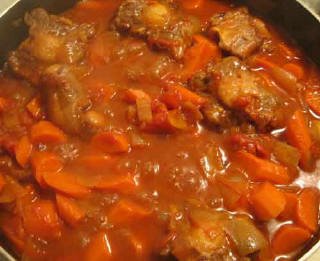 At this point, the soup has clearly begun to thicken. The simmering bubbles have separated the layers of the onions, so that the onions flaps that remain have a floppy and soggy or almost papery consistency. The carrots still have a crisp bite, almost like al dente pasta; and the oxtail meat is not yet tender enough to be eaten. 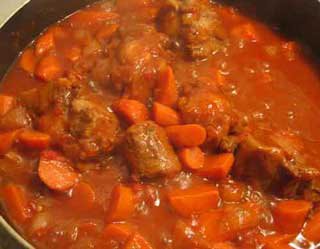 Now, the onions have begun to disappear, and the harsh lines of the carrots have softened and become rounded. The bone also begins to show as the meat tightens and pulls away. 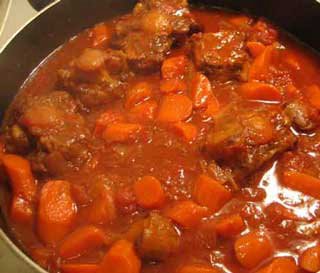 Finally, three hours later, the tough tendons, chewy gristle, and crunchy cartilage has softened into a flavorful gelatin and the marrow of the heavy bones have imparted their creaminess throughout the soup. The onions have completely melted away. At this last stage, the soup is wonderfully edible. The oxtail meat is sans any toothy tug, is smothered in deeply-flavored sauce and is very "fall-off-the-bone"--better than any barbequed rib you could ever imagine.
Stage #6

Eat! Bundling oneself in a hooded wool jacket and slurping up the steaming and thick stew is the perfect way to thaw out numbed and frozen extremities.

cooked up by Passionate Eater at Saturday, November 12, 2005