This past week, I had an insatiable desire for a messy slice of fully-loaded pizza. After unsuccessfully trying to quiet my pizza-lust with a disappointingly stale and coagulated slice from a "no-fail" pizza parlor, I decided to try a new place to stifle the little man within me.
The first critical decision that I had to make, was choosing a pizza place that would (as men usually put it), "fulfill my needs." Thus, I had to choose sides in one of the most contentious rivalries in America: Chicago-Style Deep Dish versus New York-Style Thin Crust.
After spending the afternoon surfing the internet for ideas, I realized that my stomach was yearning for the crackery-thin crunch of New York style pizza. The only challenge remaining was finding a restaurant in San Francisco that served authentic--yes, "authentic"--New York style pizza.
I decided to try out a small place on Van Ness that advertised itself as being "really from New York." Walking in, I saw two hefty-build men in ebony suits lingering around one of the back tables. Possible mobsters. Good sign.
At the front of the restaurant, the pizza chef vigorously threw pliable dough blankets in the air, using his fists to stretch out concentrated knots in the pie dough. Freshly made pizza crust. Another good sign.
I ordered two slices and sat at the bar stools so that I could watch the football game from the overhead television set. When my steaming order came out, I noticed undercooked broccoli stems and flowerets scattered across the pizza. Broccoli on pizza? Bad sign.

I paused for a moment of silent confusion. Did I order this? The pizza did not look like what I had been yearning for all week. It did not look like the classic, grease-laden slice covered with circular slices of pepperoni glistening with specks of fat, cherry-sized pork sausages seasoned with fennel, and salty black olive rounds. Instead, there were . . . Well, a lot of vegetables. 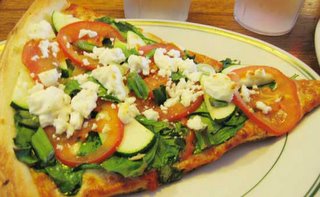 However, as I bit into the densely-topped pizza, the hot stringy cheese and molten tomato sauce partnered amazingly well with the crunchy New York style crust. I did not even realize I was eating those "items forbidden as pizza toppings in America"--namely any topping that has the same fiber content as a glass of orange Metamucil.
As I polished off my pizza slices, the satisfaction of my "urge of the week" finally set in. Not only did the pizza serve to stifle my demanding desire, but it also provided me with my recommended weekly fiber intake.
cooked up by Passionate Eater at Tuesday, November 01, 2005