Spenger's Fish Grotto Is Not That Fishy

There are two yearly events that I love participating in: Dine About Town and Caltopia's Taste of the Bay. Dine About Town is a San Francisco-wide event where the city's "finer" restaurants offer affordable prix fixe meals to people like me, from the general public. Caltopia's Taste of the Bay is a little more relaxed. It is part of U.C. Berkeley's new student orientation, where they allow students to sample from nearby restaurants at a food-fair. It is almost like an outdoor Costco, but the food is great and very cheap. But, the secret is, is that you can go even if you are not a student--that's how I went!

My boss told me about another program this past week called Gourmet East Bay's Restaurant Week. Out of the online list, I decided to try Spenger's Fresh Fish Grotto, since I am always interested when I drive by its welcoming 1950-1960's era neon sign and catch a glimpse of its creative decor (complete with fish netting drapes, foreboding oars hung in a cross-wise fashion, thick dock-side roping lining the sidewalks, and the famous ship steering wheels with the protruding spokes). 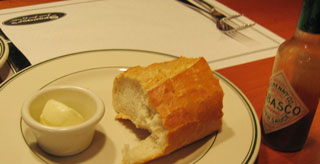 It was very busy at Spenger's, so service was lacking, and the food took a while before it came out. But service is never really a "make-or-break" issue with me. The food however, is.

First Course: Both my companion and I ordered the steaming clam chowder garnished with freshly chopped parsley. The chowder was thick and creamy, coating the spoon like a satin glove, but entirely lacking in clams. There was no rubbery snap of biting into clam as I vigorously moved my mandibles. There were tiny bites of diced potatoes, but no clams. Where I'm from, we call that cream of potato soup, not clam chowder. 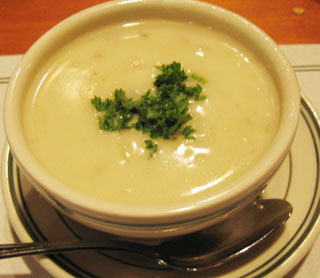 Second Course: My companion ordered the grilled trout, which was accompanied by julienned carrots, haricots verts, wilted spinach, and traditional creamy mashed potatoes. When disturbed by an inquisitive fork, the fish meat fell in tender flakes onto the plate. This moist fish was very satisfying. 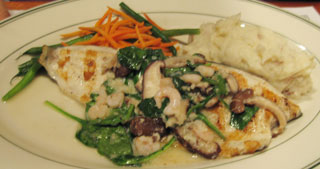 I ordered the grilled salmon with roasted red-skinned potatoes, haricots verts, and a bed of tomatoes (including sweet grape tomatoes and tongue-penetrating sun-dried tomatoes) drizzled with a fruity extra virgin olive oil. I loved the citrus acid from the lemon when contrasted with the husky and deep flavor of the sun-dried tomatoes. However, the salmon was a bit overdone--but not to the point of tasting like a bad can of tuna with all the moisture and life drained out of it. 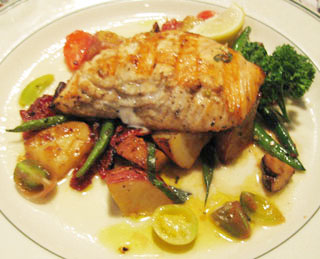 The ultimate test of the evening was the dessert, which was a rich chocolate ganache cake with raspberry coulis. The cake was definitely "stick to your tongue" sweet and very heavy to the stomach. But the sweet and sour dichotomy and the smooth syrupy raspberry sauce was wonderful.

Because fish is such a delicate meat, just cooking at a few degrees higher or a few minutes longer can totally ruin the overall experience. For that, I am generally more forgiving of busy restaurants that make mistakes with fish. I am glad that I got an opportunity to try out Spenger's, and will definitely try another restaurant in next year's Gourmet East Bay's Restaurant Week.

cooked up by Passionate Eater at Saturday, November 19, 2005