The local CBS channel up here in San Francisco has this early-evening program called Eye on the Bay. One recurring Eye on the Bay theme is "Cheap Eats," where the hosts point to places to find inexpensive, yet tasty food in the Bay Area. In each "Cheap Eats" episode they air, they dedicate airtime to "Happy Hour Deals" in the Bay Area. It is mildly pitiful (but also spellbinding) to watch the middle-aged hosts trek out in search of free or dirt-cheap food or drinks.

Two weeks ago, I decided to "one-up" the guys from Eye on the Bay, and do some Happy Hour exploration myself. All signs pointed to the Tonga Room and Hurricane Bar in San Francisco's luxurious Fairmont Hotel. My best friend and I hit the town with our purses in hand and one male companion in tow to celebrate her birthday.

The Tonga Room has its share of tacky "island" props. Timed thunder sporadically plays from the muffled 80's era speakers and little spurts of water rain down from a crooked sprinkler pipe into the milky-green indoor pool. (They call that a "tropical monsoon rainstorm.") The Tonga Room definitely features tropical kitsch in its purest, cheesiest, and most unadulterated form, but like the motto of McDonald's, "I'm lovin it."

I love that washed-out bands play live music on the island stage that is situated in the middle of the indoor pool. I love the bamboo stands and dried palm tree fans that adorn the walls and ceiling. Most of all, I love the sugary alcoholic drinks, made "purely" of sugar and alcohol.

The birthday girl and I started with their two-person lava bowl drink. From the menu, that drink sounded the most interesting.

Unfortunately, the lava bowl was saturated with so much booze concentrate that the evaporating chemical fumes stung and irritated my rapidly-watering eyes. The drink was comparable to a pleasant medley of rubbing alcohol + iodine + bleach + ammonia. One taste of the liquid lava juice and my tongue instantly recoiled from the acidic sting. Even the resident ex-bartender seated at our table remarked that the drink was "a little on the strong side." 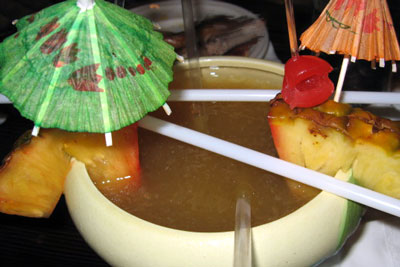 Thankfully, the mai tais and tropical daquiris that we later ordered were pretty tame, and tasted like artful fruit juice mixes. 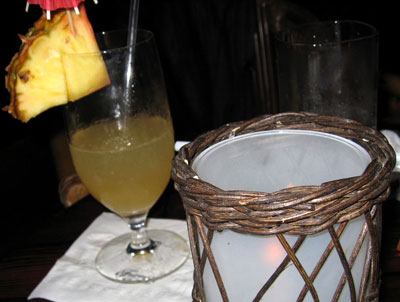 More amazing than the high levels of alcohol and sugar in the drinks, were the were minors freely roaming about in the bar. I ain't talkin' about Lindsay Lohan or Paris Hilton-aged teenie-boppers, I am talkin' about real minors. You know, "young people." I saw a five-year old boy prancing and skipping around in his swim clothes around the bar! That boy sure as heck didn't look like he was of drinking age.

Enough about the drinks and the people, let me get to the most important part of the evening, the food. The Tonga Room offers a $7.00 all-you-can-eat-appetizer-buffet during their Happy Hour. You'd be surprised how easily you can get your fill, but you'll have to make repeated visits to the buffet line to load up the tiny saucer-sized plates.

We dined on sugary slices of cool summer melon; "crispedy-crunchedy" deep-fried wontons and egg rolls; spongy, steamed Chinese buns filled with deep-red barbequed pork; and sticky pork ribs that had been basted in a sweetened soy sauce-based marinade. $7.00 for all-you-can-eat? Yea baby! The food was cheaper than the drinks! 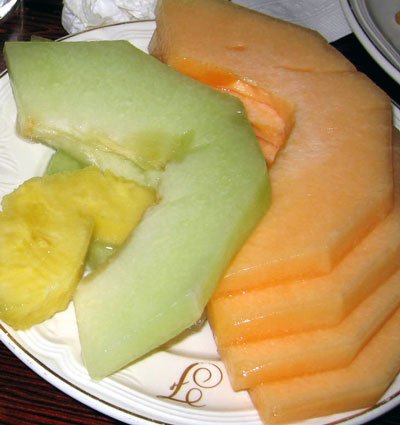 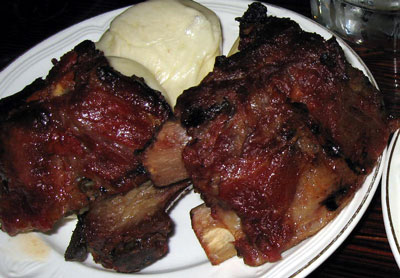 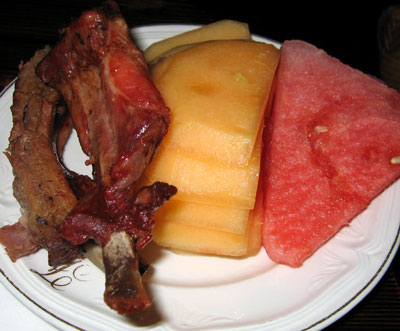 Although we left the Tonga Room the moment Happy Hour ended, we continued to celebrate my friend's birthday throughout the night. We later made a pitstop at Marrakech Moroccan Restaurant where we ordered some drinks with wise-@$$ names (like "Camel's Ride" and "Morroccan Magic"), watched some belly dancing, and smoked a fruity-flavored hookah. But even with the engaging and entertaining atmosphere there, I couldn't get the peaceful island images of the Tonga Room out of my head. I admit, the faded carpeting and the weathered wood-carved tiki statues were in dire need of basic maintenance (or at least an update), but I was made truly "happy" by the Happy Hour at the Tonga Room. I can't explain, but the combination of dyed-tissue paper and toothpick umbrellas, slender plastic straws, and marashino cherries really satisfies.

Update: I thought my Happy Hour discovery was under wraps, but I this morning (August 3, 2006), I just found a recipe for the Tonga Room's mai tai on Food Network! I guess those guys from Food Network beat me to the punch, the spiked punch that is.

cooked up by Passionate Eater at Wednesday, July 12, 2006