After being inspired by Elmo Monster's dining adventure during last year's San Pellegrino Prix Fixe season, I decided to follow suit, and try out the San Pellegrino way of dining out. Of the dining choices, I selected Fringale, a cozy and warm, yet elegant French-Basque restaurant within walking distance of AT&T Ballpark.

Unfortunately, our visit to Fringale did not start out as planned. First, I accidentally forgot my cash and credit cards at home, I had to race back to my apartment (which is 40 minutes away from my workplace and from Fringale) and speed back to try and make the reservation time. Regretfully, I was ten minutes late, and my Open Table reservation had been cancelled. (I think that means I am on the Open Table blacklist again.) However, thankfully, my bout with bad luck ended when I walked through the doors to Fringale.

Immediately, upon entering the restaurant, I could sense my luck changing as I saw the bustling tables and as I was greeted by the earnest smiles from the servers. The reassuring quality of our service at Fringale was a dramatic departure from my previous Dine About Town experiences with overly pretentious places like Rubicon.

Our server was adorable, unassuming, and attentive. She had the softest, most melodic French accent, and her sweet smile was a pleasant cross between Audrey Tautou and Keisha Castle-Hughes from Whale Rider. Most importantly, I loved that she volunteered the complimentary bottle of San Pellegrino sparkling water, and that she treated us as if we were dining at Gary Danko (i.e. waited on us hand and foot).

In addition to the service, the food was "blow-your-mind" amazing.

The beau started with three prawn raviolis made with floppy sheets of tenuous wonton skins, filled with ground shrimp, and perfectly poached in a light seafood-infused broth. A pool of thickened lobster bisque was ladled over the wontons, and the bisque was ripe with the fragrance of the deep sea. 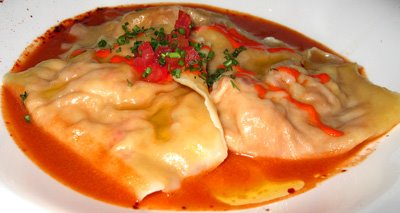 I started with the foie gras terrine, which was foie gras interlayered with a lightly-sweetened jelly and gelatin aspic. The flavors of the aspic were strong and the aspic itself was permeated with the milky essence of softened bone marrow. The foie gras was silky smooth and spread effortlessly on crisp toast rounds with even the dullest of butter knives. In addition with the chilled terrine slice, the foie gras platter featured a purple-hued fig marinated in a tangy, fine-quality red wine compotee and toasted brioche slices. 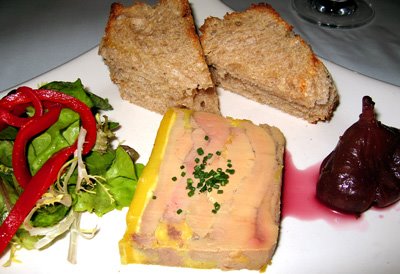 The beau ordered the Creekstone Farm black angus hanger steak and requested that it be cooked medium rare. The meat was dark red within, and was so rare that the texture was akin to tuna sashimi. The hanger steak was thick, juicy, and tender. Thus, it had all the qualities of a sublime steak, and the beau savored every bite. In addition with the steak, the beau's meal came with bite-sized wedges of seasoned pomme frites and a mix of salad greens. 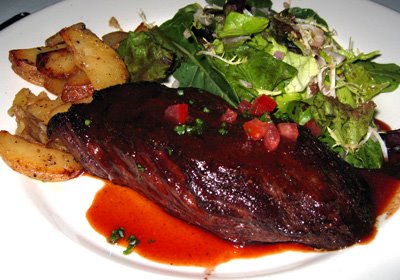 I ordered the Hawaiian walu fish steak, which was also a two- to three-inch thick slice of meat that was soft and sinfully rare within. The ivory-toned walu filet was carefully balanced on a pile of buttery and creamy mashed Yukon gold potatoes and a salad of delicate tendrils of roasted tomatoes and red peppers that were drizzled in a balsamic and olive oil vinaigrette. 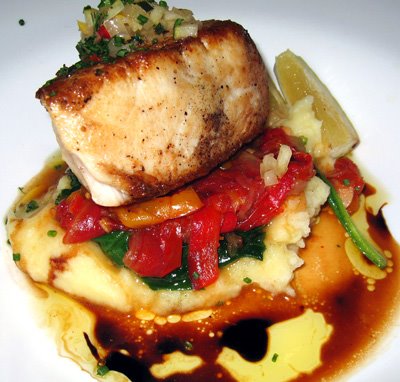 Finally, for dessert, the beau ordered our staple French dessert choice of crème brûlée. The crème brûlée rivaled the awe-inspiringly creamy crème brûlées of Bistro Liaison and Jasmine, but also had its own distinct loveliness. 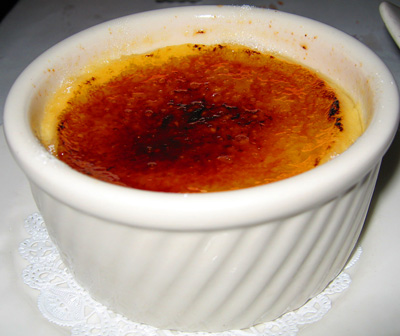 I ordered Madame Angèle’s gateau Basque almond torte which was filled with a layer of custard cream, placed on a tiny pool of liquified custard, and colorfully decorated with ripe and rotund blueberries and delicate wedges of sweetened strawberries. 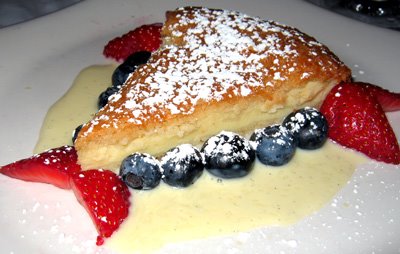 As our night ended, I realized that I had clearly had a dramatic change in luck for both the beau and I were fully satisfied. However, our experience only made us hungrier (and thirstier) for more San Pellegrino prix fixe offerings.
cooked up by Passionate Eater at Monday, September 18, 2006